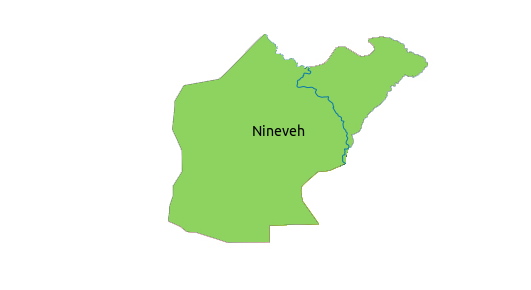 The Governorate of Ninewa is located in the Northwestern part of Iraq, about 400 kilometers from Baghdad, covering an area of 36,515 square kilometers. Nineveh’s population is slightly over 3.5 million people. Nineveh’s largest city, Mosul, is the largest city, by area, in the country, after Baghdad. The Governorate of Ninewa has only one University, located in Mosul. However, the Governorate has more than 1,500 primary schools and almost 500 secondary schools. Ninewa is the home to tourist attractions such as the Mosque of Prophet Younus to the Dam of Mosul. The main road and railway connecting Baghdad and Turkey pass through Mosul, the Capital of Nineveh. Nineveh also has an international airport and several bridges over the River Tigris. The governorate of Nineveh has a history dating back to 5000 B. C. Regarded as a major historical-significant city in Iraq, Ninawa was the capital of the Assyrian Empire.

Pronunciation and Spelling: Kurdish people spell Ninewa-Ninevah, due to a different alphabet.

1) Baghdad based Iraqi-Kurdish company KAR is under contract to build Ninewah planned 90,000 BPD oil refinery. So far, the KAR Group has been working on the Erbil refinery in partnership with Texas based Ventech Company, in addition to a number of oil, gas and construction projects in Iraq. The new refinery will house an associated 300 MW power plant and will generate approximately $1.15 million a day in revenues for the province, according to Nineveh’s Governor Atheel al-Nujaifi. The refinery will be constructed in two phases, according to Ninewa Oil Committee chairman Hashim Brifkani.

“We are not ready to wait for decades until the crude runs out from the south to start energy investment in Ninewa province … We listened to [oil companies’] proposals about how to best invest in Nineveh, but we did not sign deals….We will start oil investments in the province with a priority to the downstream industry, and that could be followed by broader investments in the upstream sector … When we have oil majors working, then definitely there will be social benefits, job opportunities and economic gains. Huge investments could create a better, stable environment.”

In late 2013, Ninewa’s provincial council granted its governor the ability to make deals with foreign oil companies without the consent of Iraq’s central government. Baghdad immediately vetoed the action. Nujaifi has drafted regulations that allow investors to bid for an integrated project to construct a 150,000 bpd refinery and develop an oilfield to feed it. Nujaifi said Ninevah holds roughly 20 untapped oilfields and also holds the potential for huge oilfields that have not yet been discovered.

Currently the government of Ninewa is looking for foreign investors to build an oil refinery that will refine 150 barrels per day.

The overnment in Ninewa is looking to construct medicl centers, ranging from general hospitals to specialized centers, as well as factories producing medical equipment.

Currently the government in Ninewa is looking for investors to build a variety of housing complexes, ranging from large to small.

The government in Ninevah is looking to build a new rail line for transporting goods as well as passengers running through Ninewa and Duhok. Below are specifics for the project, as indicated by the Iraqi Investment Commission.

Currently the government in Ninewa is looking to build three different commercial complexes and malls in the governorate.

The government in Ninewa is looking for investors to build agriculture and cattle-rearing facilities as well as a smaller plant or animals project.